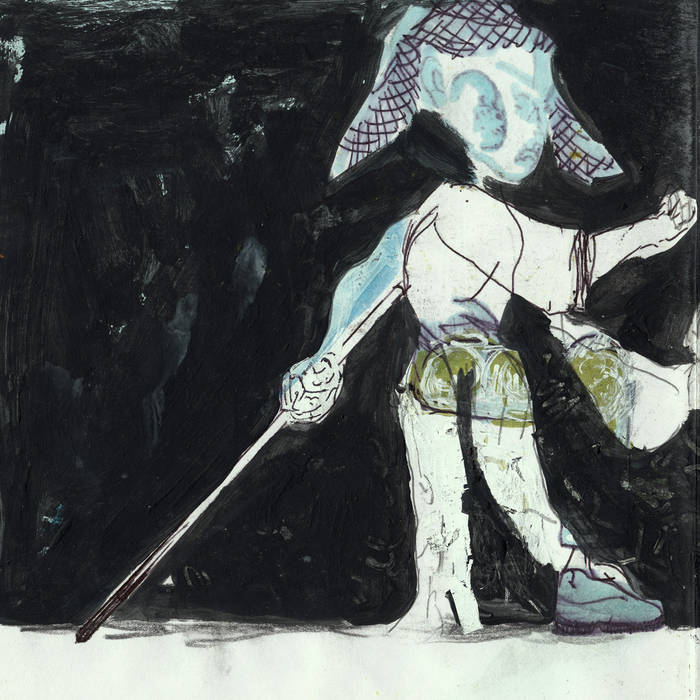 Tattooedkillhand I Do What I Want is currently knockin' me out! Bravo, sir. Say, if ya can print anymore XL "coin" t-shirts for us fuller bastards, I'm in.
P.S. 4/8/20...scratch that, this ENTIRE record is insanely good and knockin' me out!

Evelyn Stevens Because of it's contagious energy. It's wild improvisation. It's irony. It's sweetness. It's earworm riffs. and er… because he's my son and the band are ace!
Favourite track -depends on my mood but probably Canary just gets it.

Irma Vep is the on-going, evolving main vehicle for polymath musician Edwin Stevens and on Embarrassed Landscape the project has reached a zenith. Primarily recorded in Stevens’s adopted home town of Glasgow over two days with frequent collaborators Ruari Maclean and Andrew Cheetham, Embarrassed Landscape is an album that breathes in a fetid skip full of millennial dread, self-effacing anxiety and doubt before exhaling it as heartbreaking songs and ecstatic abandon. Following a series of limited releases spread out over the course of a decade, recorded in fits and starts around the United Kingdom as the protagonists wanderlust saw fit, Irma Vep’s 4th album proper presents Stevens’s vision in its fullest and most realised form.

Built around the skeleton of Stevens’s songwriting and fleshed out with loose, virtuoso playing, it’s a body of work that could have been the anxious songs of an over-thinker but rendered here Embarrassed Landscape revels in a kind of un-selfconscious confidence. Indeed, various tensions throughout the album are constantly revealing. Lyrics are riven with poetic, crushing self-analysis and absurdity only to be performed against a backdrop of trance-rock music skewered with Stevens’s own instantly recognisable guitar playing, a style free and full of fire. Songs wring nuggets of uncanny truth out of prosaic, every day activities while sounding like Rolling Thunder Revue era-Dylan. Songs that seem hewn from some unspeakable personal pain are laced with a disarming streak of black humour, massive, world-ending psych jams that harken to Vibracathedral Orchestra’s wall of sound dissipate into tender songs that deserve to be picked apart and cried to. Tension needs release and here the release needs tension.

For example, Opener King Kong is bold in several directions at once. A pummelling trance spurred on by the endlessly enjoyable interplay between drummer Andrew Cheetham’s free jazz-inflected style and Stevens’s barely contained guitar wildness, the music screes for 6 minutes of transportation on its own steam before Stevens’s vocal even comes in. It’s a ballsy album kick-off that makes complete sense with the opening line: “The longest joke I told / Got stuck my throat / And fell flat on its face / So I wrote this song and I called it King Kong.” It’s 10 glorious minutes that feel like ecstasy, over in a minute, the listener plugged into some universal nirvana. Immediately after however, on Disaster Stevens’s self-examination is forensic, with a lurching songwriting dappled with sparkling guitar work reminiscent of Richard and Linda Thompson’s work on I Want To See The Bright Lights Tonight. I Do What I Want and Standards feel like classic songwriting vehicles, featuring extra piano by Glasgow musician Stevie Jones and atmospheric violin textures by long-time friend and IV collaborator dbh that drip through the cracks in Stevens’s voice.

Perhaps the biggest dichotomy at the heart of Embarrassed Landscape is between the unbridled energy of the songs’ performances, their often bold arrangements and the heartbreaking, darkly funny songwriting at their heart. On Tears Are The Sweetest Sauce, a scratchy countrified lilt frames Irma Vep’s mask of twice-removed malice peppered with sweet, twisted observations... “pull an apple from a tree and suck out a worm / let it curl up and die on your tongue.” Stevens paints an uncaring protagonist: “Your tears are the sweetest sauce my love, your tears are what I want. I made you cry / and I know why / your tears are the sweetest sauce.” The tension between the gorgeous resolution of the song’s arrangement and the grimly comic lyrics is palpable.

Closing song Canary brings most of these tensions to a sweet end. Within the alternating crescendos of violin and guitar Stevens intones about canaries brushing teeth down sinks, alcohol abuse, ghostly images half-seen through the fug of depression yet saved somehow by the social crutches friends and lovers provide. Embarrassed Landscape feels like the album Irma Vep always threatened to make, by some strange alchemy transforming the anxieties and self-criticisms inherent in the lyrics into a liberation, a letting go, a release from the tensions built up by a life lived full.

Bandcamp Daily  your guide to the world of Bandcamp